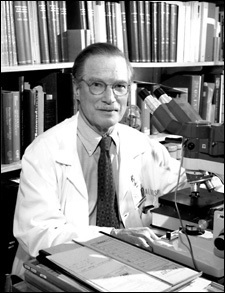 Greetings to you all from God’s own country!!
The south-west monsoon arrived here about a week with plenty of rains. Currently it is progressing towards the rest of the country. I am sure some of you will be already enjoying the rains by now and others will also get their share of rains soon.
In continuation on ‘Legends in Neuropathology’, I send herewith the ‘write-up about Professor Edward Pierson Richardson. I am sure most of would derive inspiration by reading this.

Prof. Edward Pierson Richardson Jr (EPR) was born at Massachusetts General Hospital (MGH), Boston on April 3, 1918, and the descendent of an illustrious Boston medical family with long standing medical roots. Both his Father (Edward Pierson Richardson) and Grandfather (Maurice Howe Richardson) were the Professors of Surgery at Harvard Medical School (HMS). His Mother- Clara Shattuck came from a distinguished line of Harvard physicians. In her honour, the road leading to Harvard Medical School is named as 25 –Shattuck Road.

EPR graduated from HMS in 1943. His long association with MGH began with an internship in Medicine and was only interrupted by service as a Neuro –Psychiatrist in US Army between 1944- 1946. He rejoined MGH in 1946 as a Resident in the Department of Psychiatry. During this period he was strongly influenced by Doctors, Stanley Cobb and Charles S Kubik who were both Neuropathologists. In 1947 –48, he visited National Hospital for Nervous Diseases, Queen’s Square, London where he met Dr J Godwin Greenfield the noted neuropathologist, who confirmed EP’s burgeoning interest in neuropathology.

During Dr Kubik’s tenure as Director of Neuropathology, a tradition grew of having neuropathological teaching session on every Tuesday evening. Prof EPR continued this practice. The entire team in the Neuropathology laboratory would assemble for dinner at the Cafeteria. Following that Prof EPR would get out his ‘little black book’ of interesting cases and present the slides from one of them for analysis by the group. Later everyone would discuss their observations and diagnosis. The evening would culminate with a reading of the ‘real story’ by EPR and he also would discuss the case and correlate the neuropathological features with the clinical presentation of the case. He directed the neuropathology service  at MGH until 1989. Although he formally retired in that year he continued to work and teach until a few months before his death. Despite his many neuropathological duties, Prof.EPR remained a sought after clinician, attending regularly on the wards and engaging in a limited clinical neurological practice.

The breadth and depth of his knowledge in neuropathology was continually fed by his excitement on looking through the microscope, especially when it was rewarded by finding a hitherto unrecognized diagnostic feature or by gaining insight into a disease process. Prof. EPR’s contribution in Neuropathology is extensive and phenomenal .These include Progressive Multi- focal leuko-encephalopathy (PML), Corticobasal degeneration, granulomatous angitis of the CNS, neurological manifestations of systemic lupus erythematosus, sub- acute combined degeneration of the spinal cord, demyelinating diseases, Leuko-dystrophies, Huntington disease, Creuzfeldt-Jakob’s disease. Also remarkable was his careful analysis of hundreds Clinicopathological case studies which appeared over years in the New England Journal of medicine. All of his writings were characterized by precise wordings and clear syntax, exhaustive survey of the literature and meticulous study of the clinical material

He was widely recognized for his achievements and received numerous honors. He served on the editorial boards of many neurology, pathology, and neuropathology journals. He was elected President of the American Association of Neuropathologists for 1973-74, and in 1988, the American Association of Neuropathologists awarded him its Meritorious Service award. He was a Charter Member of and an active participant in the Diagnostic Slide Session of the American Association of Neuropathologists from its inception in 1958. He served as a consultant to the National Institutes of Health in many capacities including service on the Council of the National Institute of Neurological and Communicative Disorders and Stroke. In 1982, he received the Senior Scientist Award of the Alexander von Humboldt Foundation. He was elected a member of the Royal Society of Medicine in 1984. He was twice Litchfield Lecturer at Oxford University, first in 1975 and again in 1990. Also, in 1990 he was the Dorothy Russell Memorial Lecturer of the British Neuropathological Association. He served on the Boards of the National Multiple Sclerosis Society, The United Leukodystrophy Foundation, and The French Foundation for Alzheimer’s Research and others.

Above all, Prof.EPR was a warm, friendly, courteous, cheerful person who was unfailingly kind to all he met. His soft-spoken friendly manner endeared him to his trainees and to his colleagues. He was a paradigm of fellowship and probity and had an equanimity that was the envy of his colleagues. He was, however, never reluctant to disagree quietly but firmly with any proposed diagnosis he thought was incorrect. Such an event would suddenly alter his placid manner to one of joyful exuberance. The deep affection that he engendered in his trainees was demonstrated by the return of more than 130 of them to a celebration in his honor in 1990.I was fortunate enough to be one among them.

EPR left for heavenly abode on November 30,1998 after a long battle with Lymphoma. He was survived by his wife Peggy and his three children Clara, Margaret and Ned. At the funeral service, his brother Elliot defined three of EPR’s most remarkable qualities – Balance of mind and spirit, coherence and integrity. To these I wish to add two more qualities- Generosity and wisdom.